Henri Poincare, the nineteenth-century French mathematician who discovered fuchsian functions, has written, “Every day I seated myself at my work table, stayed an hour or two, tried a great number of combinations and reached no results. One eve­ning, contrary to my custom, I drank black coffee and could not sleep. Ideas rose in clouds; I felt them collide until pairs interlocked, so to speak, making a stable combination. But the next morning ... I had only to write out the results, which took but a few hours.” 1

Learning of Poincare's experience was particularly interesting to me because at the time I felt I was having a similar kind of experience in my own work. After a work session in which I would encounter difficulty with a form, I would lie down for a rest. But in a half-awake/half-asleep state I could visualize in my mind how the form should be. What I had experienced was an inner vision that interacted with my outer vision. “In their mind's eye people ‘see’ memories of past events, imagine future situations, daydream of what may be or might have been, dream of vividly textured happenings beyond the bounds of space and time.” 2

The plastic nature of clay has been a perfect match for my mind as it conjures up form largely from an inner vision. The mind instructs the hands as the clay takes shape before the eyes. Sometimes the mind instructs the process. Lately I have been working with a new tool, the computer. Workers in clay vary greatly in their attitude toward the computer, but I will say that it has made me even more impressed with the speed and accuracy of the human mind.

Clay artists have a perception of space that is dynamic because they understand space as it relates to physical motion. They actively search with various forming processes to see what can be done with the plastic medium in a given space, rather than give themselves over to passively viewing the space itself. From a given lump of plastic clay they can physically lift a bowl into space on the potter's wheel. The clay rises with the corkscrew twist impressed in the throwing marks as the form challenges the force of gravity.

Perhaps clay thrown on the potter's wheel attracted me to the concept of the helix, a single line that snakes in equal arcs over and under the horizontal centerline. I had an inner vision of a clay form being made with a horizontal orientation. Later, a small rusted piece of auger blade caught my interest because it, too, had a horizontal twist. I saw large-scaled augers on construction sites that were used to dig holes in the earth.

A metaphor developed in my thinking: the auger that digs in the earth and the auger form made from clay, earth's material. In my mind's eye I held on to this dynamic, horizontal, twisting form, a form that existed in a space where there seemed to be no force of gravity.

I have always been interested in the way soft-feeling clay relates to hard-feeling materials such as wood and metal. The relationship is like flesh to bones. In animals, bones are an armature that supports flesh. 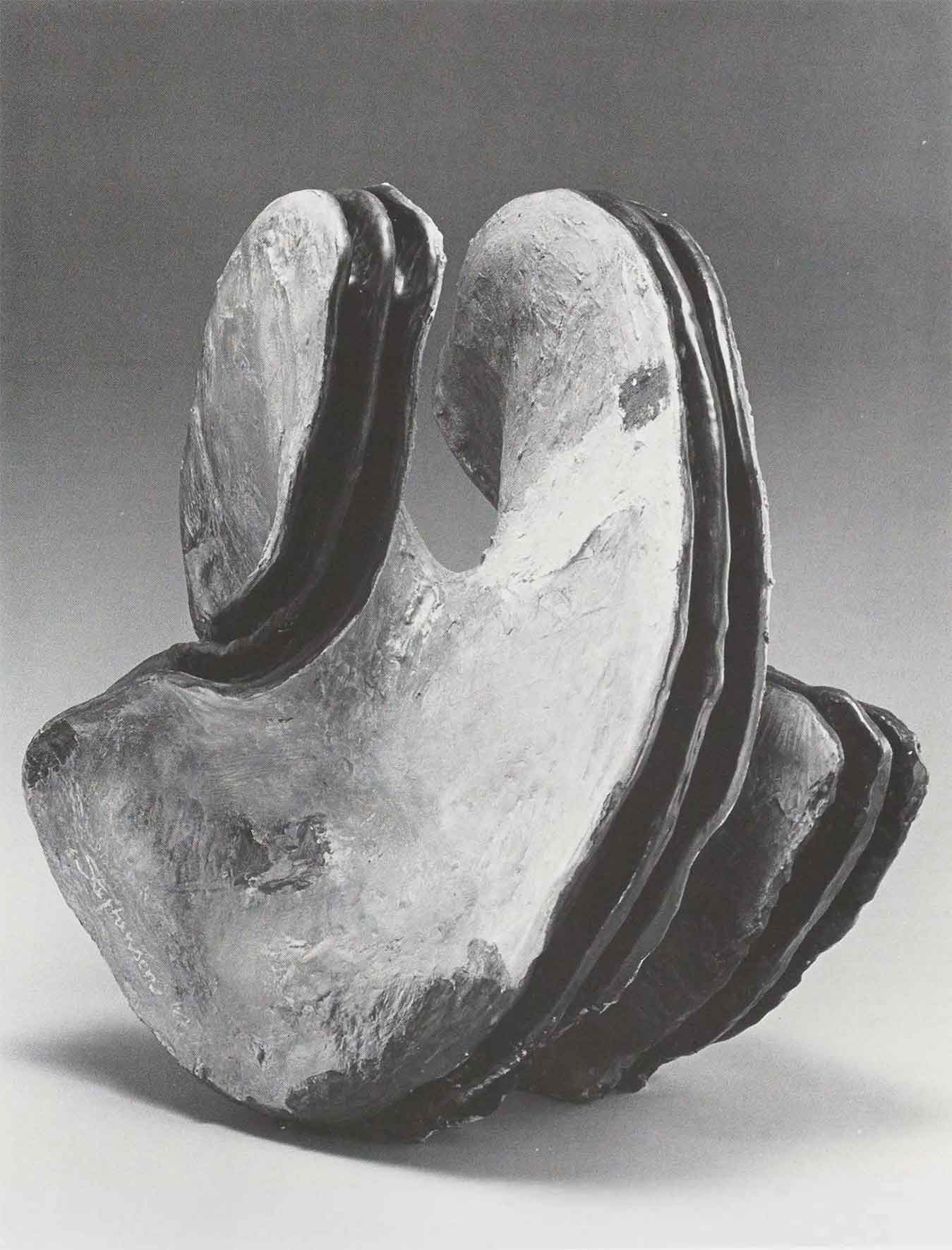 I decided to work with the auger form using an armature that could be removed when the piece was firm enough to stand on its own weight. As I started working, what had been the horizontal centerline in the drawing became a horizontal piece of aluminum pipe suspended at each end by a vertical two-by-four. It looked and functioned like a rotisserie.

This was my first use of an armature in the clay-forming process. The pipe became the center of the piece on which I started working the clay. Holes were drilled at intervals, perpendicular to the pipe, through which aluminum rods were placed. These straight rods, while remaining perpendicular to the center pipe, were placed in such a way that they described the twist of the auger form.

The mind is capable of mentally stretching the form in many directions. Working with the helix concept, I envisioned and completed a series of twisting, horizontal ceramic augers. From complex concepts I moved to a reductive, simplified concept of a single twist of a two-dimensional plane. Because the auger form as it eventually developed had a different feeling from the pot thrown on the wheel, I moved the concept to five-foot vertical forms that twist somewhat like a blade of grass. What would happen if the form twisted in a circle on itself to become a clay Mobius strip? Squeezing the auger form compressed it somewhat like an accordion; then focusing on the circular end view and stretching it tall developed a free-standing ceramic form with strong references to the ceramic platter. John Stephenson (1929-2015) was an artist and educator in Ann Arbor, Michigan for over thirty-five years. He began a distinguished career teaching ceramics at the University of Michigan in 1959 after receiving his MFA from Cranbrook Academy of Art. Stephenson exhibited nationally and internationally.